Celebrating Pioneer Women in the Otways

In celebrating the International Women's Day 2021 theme, Choose to Challenge, we can reflect on the pioneer women of the Otways.  One of the first women to settle in Beech Forest was Marie Rose Deppeler. Marie Rose arrived in Beech Forest, along with her husband Godfried Deppeler, by wagonette in 1890, pioneering the home farm on which she lived until her death in 1956. Born Marie Rose Le Feuvre in France in 1867 and arriving in Australia along with her brother and mother in 1878, Marie travelled to Beech Forest via Queensland, Bendigo and Geelong, with Godfried who she married at age 19. Marie tells the story of her arrival, “with two young children we travelled by wagonette to Gellibrand then by bullock wagon through the unknown bush country over unmade roads to Ditchley Park where John Gardner had settled with his wife and family”  Marie’s journey continued by horseback to the property that she lived on for the rest of her life. Marie settled into her new life in a house built

The Redwoods, the cathedral, the majestic forest

No longer the well kept Otways secret, the majestic Redwood forest beckons visitors to wander through the carpeted forest floor, these enormous trees  compelling our silence and whispers.   But what of the history?  Who planted them here, when and why?  Roger Smith provides the answers to these questions and more in, The Redwoods of the Otway Ranges.  Smith tells us that the first experimental planting of the Sequioa sempervirens was in 1929, then 1930 & 1932 in the Aire Valley by the Forest Commission.  Four years later in 1936 the river flat near the Aire Bridge Crossing was chosen for further planting.  This proved to be a successful site due to the fertile soil and the dense scrub which was a useful shelter for the early growth years.  It is thought that the seedlings were most likely grown in the Macedon Nursery, possibly originating from the West Coast of North America. When the stands were 41 years of ages the height was 40.3, climbing to 59.8 in 2004, and at 68 years old 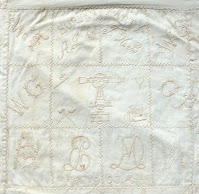 Throughout Australia many communities marked the significance of Federation by creating pieces of domestic memorabilia such as quilts.  The Otways Federation coverlet is a textile-based journey into the past, chronicling the story of settlement in the Otway region. Each embroidered panel relates to local people from areas around Beech Forest and Gellibrand, listed either by full names or initials, many of whom worked under harsh conditions to survey land holdings, roads and the railway.  One square, number 3, commemorates a survey party, who travelled from Carlisle, camping and enduring the harsh conditions of rain, hail, snow and wind along with their horses who would sink deeply into the earth with the deplorable road conditions on the way to Cape Horn. Another great example of how the individual squares depicted families and where they lived can be seen in square 18 with initials and names; Selina Pearce, WGW (William George Webb), Edward Deppeler, Henry Deppeler, John Bird, G H Bat